Espadrilles, alpargatas or espardenyes are normally casual, flat, but sometimes high-heeled shoes originated in thePyrenees. They usually have a canvas or cotton fabric upper and a flexible sole made of jute rope. The jute rope sole is the defining characteristic of an espadrille; the uppers vary widely in style.

In Quebec, however, espadrille is the usual term for running shoes or sneakers.

The existence of this kind of shoes in Europe is documented since at least 1322, when they appear described for the first time with its current Catalan name. 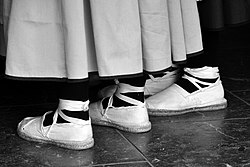 Typical clothing with espadrilles in theAndes

The term espadrille is French and derives from the word in the Occitan language, which comes from espardenya, in Catalan oralpargata and esparteña in Castilian/Spanish. Both espardenya and esparteña refer to a type of shoes made with esparto, a tough, wiry Mediterranean grass used in making rope. Its name in the Basque region is espartina.

Traditional espadrille in this painting by de Francesc Galofré. A model,1894

Espadrilles have been made in Pyrennean Catalonia (Spain - France) and the Occitania region since the 14th century at least, and there are shops in the Basque country (Spain) still in existence that have been making espadrilles for over a century. The oldest, most primitive form of espadrilles dates as far back as 4000 years ago. Traditional espadrilles have acanvas upper with the toe and vamp cut in one piece and seamed to the rope sole at the sides. Often they have laces at the throat that are wrapped around the ankle to hold the shoes securely in place. Traditional espadrilles are worn by both men and women.

Once peasant footwear, then urban workers footwear, espadrilles nowadays have grown in popularity, especially in the Spanish Mediterranean coast from Granada to Girona and the Basque countries, where many men and women wear them during the spring and summer months. Designer espadrilles are now widely available. They are usually manufactured in Spain and South Asia. Modern espadrilles are predominantly for women, though some men's shoes are made in this style.

The soles of espadrilles may be flat, platform, or wedge shaped made of natural fiber. Uppers may be made from nearly any substance and may have open or closed toes, open or closed backs, and can be slip-on or tied to the ankle with laces. Thousands of varieties of espadrilles can be found, from inexpensive bargain brands to high priced designer brands.

Espadrilles became fashionable in the USA in the 1940s. Lauren Bacall's character in the 1948 movie Key Largo wore ankle-laced espadrilles.

The espadrille style was revived in the USA in the 1980s, due to the success of Miami Vice—the shoe was worn by the character Sonny Crockett (played by Don Johnson). In 2013 at luxury shoe stores in New York City, a pair of espadrilles could cost nearly $500.

Only second to cotton in favor as a natural fiber, jute is exclusively used in the manufacture of genuine espadrilles.The soles of espadrilles are now commonly made with jute rope or braid, which is favored because of its eco-friendliness compared to synthetic substances. The natural bright white color of jute is a major design feature of modern espadrilles.

Jute soles typically include fully or partially vulcanized rubber beneath the jute soles for long-lasting espadrille shoes. Sometimes crepe soles are used as out-soles although those are not as durable compared to vulcanized ones. Jute braid soles might include heels made of wood or EVA foam.

Assembling of a jute sole

The manufacture of espadrilles is generally more complex than that of sandals. The jute soles are the most critical part. The jute twines are first machine-braided. These braids are then manually formed into the shape of the sole and hydraulically pressed with heat to form the final shape and completed with vertical stitching. These basic soles are then vulcanized underneath. EVA foam or wooden heels are glued in place and more jute braids are wrapped around it to complete the soles. Uppers of different styles are then built on the jute soles to complete the espadrille. 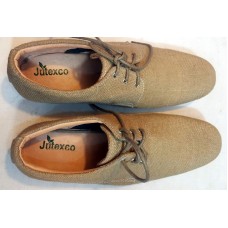 Jute, lather and imported rubber sol made gents shoes. It has two colour. Another is black...